Considering the Benefits of a Tax Extension as a Financial Advisor 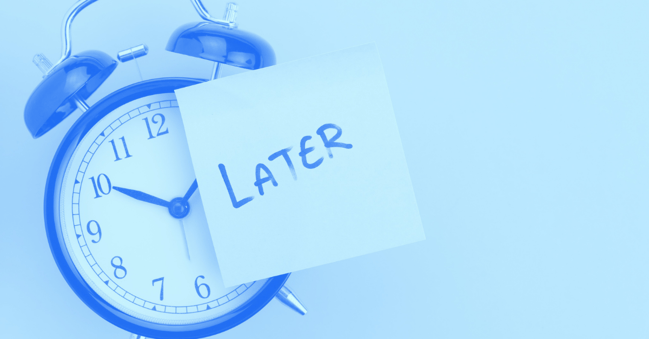 Let's talk about procrastination and when it can sometimes be the right thing to do (when it comes to your taxes, at least). By procrastination, I don’t mean putting filing off. I am talking about filing an extension to give yourself more time to navigate the ever-changing tax landscape. From the pandemic to natural disasters, there are plenty of extenuating circumstances affecting how and when you or your clients will be ready to file taxes.

The recent winter storms in Texas were so severe that President Biden declared it a major disaster and automatically extended the time to file returns and make certain payments for those affected. The IRS and other government agencies recognize such disasters affect taxpayers, and so they grant time to focus on recovery and let upcoming regulatory tax filings wait. Nearly every natural disaster has a similar extension granted. Last year the April 15 deadline was extended for taxpayers nationwide through July 15 due to the COVID-19 crisis. Although several congress members have requested a similar national extension again this year because conditions have not improved, the IRS has indicated it will not extend the deadline again.

As the current tax deadlines approach for those not located in Texas, it’s often asked if it is better to file an extension in order to file later than it is to hurry a return to completion. As we will discuss, it usually is. Your tax preparer will also thank you for allowing them to finish the return during the normally slower summer months. Let’s consider some circumstances that may make it appropriate for you to file an extension as a way of advocating for yourself or your clients.

First off, an extension gives you more time to file the return, but it does not grant additional time to pay any taxes owed. You will need to be sure to make any required payment along with the extension to avoid penalties. Since the 1st quarter estimate is also due April 15, many taxpayers include the 1st quarter estimate in their extension payment and apply the overpayment when the return is filed. This gives some cushion in case the expected liability was understated.

For taxpayers with investments like K-1s from trusts, partnerships, or S corporations, the information may not be available when the individual return is due. These taxpayers have to extend due to missing information.

Due to life events, other taxpayers may not be able to concentrate enough to gather the documents necessary to file the return on time. A move, for example, might mean needed documents are boxed away or getting forwarded to the new residence. If original documents were misplaced, sometimes it will take time to get replacements. Family health issues, COVID-19 travel restrictions, and many other situations can inhibit taxpayers from finishing their returns on time.

At the time of writing this, the third stimulus bill is being considered in Congress. Many taxpayers desire to game the system by determining if filing the current year on time would generate a lesser stimulus check than waiting to file. Last year at this time, there was a frenzy of taxpayers that wanted to file quickly to base the stimulus on their lower 2019 income instead of their 2018 income. Others wanted to hold off filing because, in 2019, they had higher income. We are already seeing some taxpayers this year playing the same game.

Taxpayers that are buying a home may face a similar dilemma. Will they qualify better for a loan under the prior return or the current one? By not having a tax return on file for the current year, the lender will need to make their lending decisions using other information available.

For many who are self-employed and want to fund a retirement plan, the due date for SEP contributions is the return’s extended due date. Unlike IRA contributions that are mostly limited to $6,000 and have to be contributed by April 15, the SEP contribution can be made as late as October 15. This gives the small business owner time to save up for that contribution and the use of that cash in the meantime. Granted, this means the taxpayer loses out on the potential growth once it is contributed to the plan.

Many states follow the federal rules pretty closely. In fact, about half of them are nearly exact on the taxation of most income and deductions. The differences often arise around federal moves to stimulate the economy. Deductions for depreciation sped up so fast due to Bonus and Electing Expensing under 179 that many states broke with the federal policy and forced slower expensing.

This year the hot issue is the Payment Protection Program (PPP) loan forgiveness and round two of funding PPP loans. It took an act of Congress to overturn the IRS interpretation that the expenses paid with PPP funds were still deductible. This was going to cause chaos for tax return preparation as ordinary and necessary expenses like wage, rent, and utilities for running a business were not going to be deductible on the federal return to the extent they were paid with PPP funds. Although the Consolidated Appropriations Act did affect how the federal returns are allowed to take deductions, it opened a can of worms as far as what states were going to do, as drastic tax law changes affect state revenue.

Here is a map of state conformity: 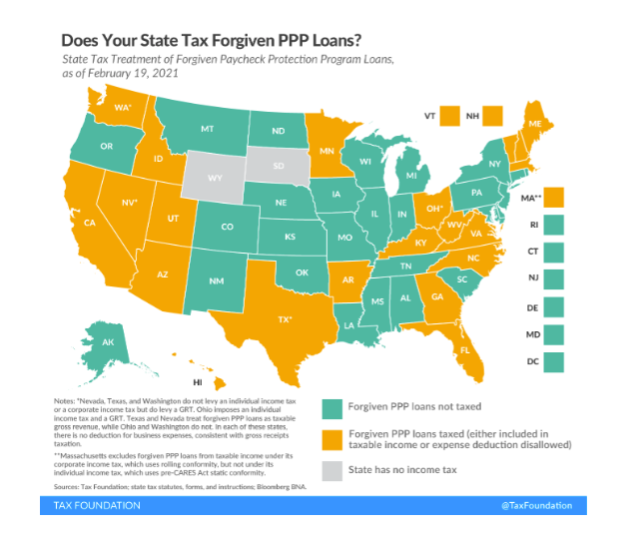 All those green states are following the federal treatment for allowing the expenses to be deducted from PPP loans. The yellow states currently say the expenses are taxable, or just the reverse, that the loan forgiveness is taxable, but they allow the deductions. Some of these states are working on solutions to be more generous to taxpayers. California recently announced an agreement that for PPP forgiveness less than $150,000, they would allow the deductions. However, it is a verbal agreement; it still is not a codified law that can be used to file California returns under, as a verbal agreement is not authority. As anyone knows who has followed the progress of bills being passed, what finally turns into law may not be what was intended or promised at the start.

Another point of state non-conformity is when the deductions are allowed, or the debt forgiveness reported. Many taxpayers have applied for but have not received notice of forgiveness on their 2020 PPP loans. These late tax law changes—for those in states still considering changes—means it is better to file an extension now than to file a return now and amend later.

A few years ago, when the Tax Cuts and Jobs Act of 2018 was passed, a similar flurry of states were considering law changes. Arizona enacted a new law on May 31, 2019, conforming its state taxes to the federal Tax Cuts and Jobs Act (TCJA) as of 2018, and making a number of other changes to reduce the income tax burden on Arizona taxpayers. Among federal changes adopted is a suspension of the moving expense deduction/exclusion through 2025. What was a taxpayer in that state to do if they wanted to file their return before the April 15 deadline, but the state had not codified conformity? Some filed in the hopes it would and others extended so their returns were filed correctly.

Why not just plan to amend later? For the simple reason that amended returns are processed differently and often take longer. Only recently have electronically filed amended federal 1040 returns been possible. Before this, the return had to be filed by paper with supporting documentation for the changes. Remember, the original tax return is signed under penalty of perjury that the return is correct and complete. Here is the actual language from a 1040 return:

Under penalties of perjury, I declare that I have examined this return and accompanying schedules and statements, and to the best of my knowledge and belief, they are true, correct, and complete. Declaration of preparer (other than taxpayer) is based on all information of which preparer has any knowledge.

For those that struggle with organization, allowing six more months to misplace needed documents is just inviting trouble. Once the extended deadline rolls around, these taxpayers often ask again to file the return and amend later, or just file delinquent. From experience, I can say few of these returns are actually amended later.

For those taxpayers who did not tax plan and have overpaid their taxes, filing on time puts an end to their interest-free loan to the government.

Does filing an extension cause more or less scrutiny of tax returns?

The short answer is no. Long ago, before electronically filing returns even became available, the IRS would select a number of returns to audit randomly. Coincidentally, most of them came from returns filed on time because that was a known population to choose from. In this case, filing early put taxpayers into the population that was chosen for audit. Thankfully, with computers preparing more returns and calculations being more accurate and complete, along with years of budget cuts, the IRS has been forced to be more strategic in auditing clients. For comparison, the first-ever returns filed in 1913 were all audited because that was the way to process returns. In 2018, only 0.59% of all individual returns earned such intense review, down from 1.11% in 2010.

So, filing an extension is not always just another way to say “procrastinating.” There are many good, valid reasons to extend, along with a few reasons not to. The takeaway here is not to let April 15 or other due dates pressure you or your clients into filing incomplete returns. Filing an extension can be a way for you to advocate for yourself or your clients and provide the time needed to prepare the return correctly—the first time! 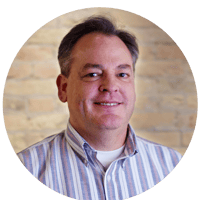 About the Author
Michael Law, CPA, is a Senior Tax Manager for XY Tax Solutions, a wholly-owned subsidiary of XYPN offering an outsourced tax team for XYPN members. Michael has 22 years of experience including time spent as Vice President of Tax Operations at Goldman Sachs. Other hats he has worn throughout his career include Supervising Senior Accountant, Tax Manager, Audit Manager, and Tax Partner.

Five Tips for Writing Effective Job Descriptions for Your Firm